Working in partnership with: 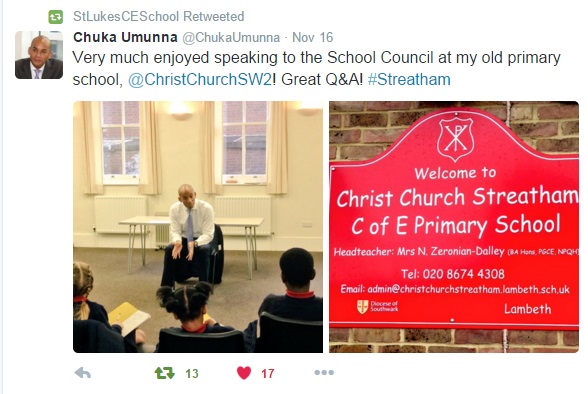 The session gave the children the confidence to play an integral role during this important visit. It was a lively, pupil centred, well-structured and focused session. Chuka was thoroughly impressed with our learners’ questions, ideas and confidence. He was able to use child friendly language and ensured all that the children had a good understanding of the role of parliament and the importance of democracy.

The question and answer session was highly successful and stimulating for all involved. It was a great opportunity for all the children and hopefully, we can continue to encourage the children to engage further in parliamentary initiatives in the future.

The learners from both schools took the opportunity to have lunch together at the Top Table to explore the ideas discussed during their meeting. 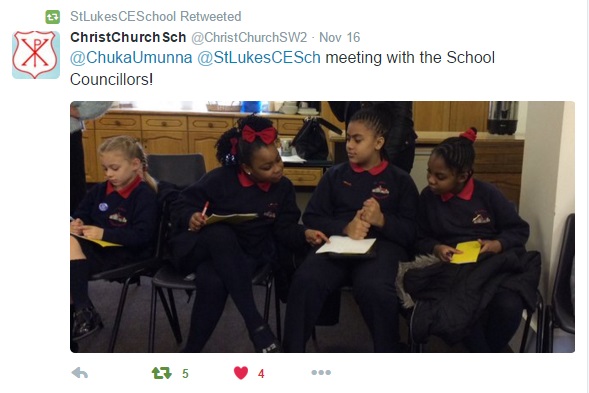 Chuka was asked the following questions:

Do you enjoy your job?

I love my job; it is a tremendous position to be in. You meet very famous people like the Queen. I am very privileged. I’d love to do it forever.

What are the House of Lords?

Do you ever think you will be Prime Minister?

I have absolutely no idea. Do you?

How did you become a MP?

Does an MP have another job?

I don’t. Some do though. I think there are many pros and cons for this debate.

Who are in the cabinet?

It is a way of organising society. It is linked to rights and responsibilities. Democracy is a system of government where all people are involved in making decisions by electing representatives.

How are laws made?

The Government, who run the country, will put forward a proposal for a new law. The majority of the government must all agree with that law. The process can take up to 7 or 8 months, or it can take 3-4 months, it depends on the complexity of the law.

Where does the Queen fit in?

The Queen does not play a political part in the process. The Queen only agrees to what the majority of the Government agrees to do.

How does it feel to sit in parliament?

It is amazing! Nothing like a normal work office. I used to be a lawyer and I think that job is boring compared to being an MP.

How hard is your job?

It is quite hard because you cannot help everybody.

What kind of situations do you help in?

For example: A grandmother was shot by the police but the police wouldn’t admit it, so I went and represented the family in court.

Do you think Jeremy Corbyn will be the next Prime Minister?

I don’t know. It depends who the public votes for.

What changes are you looking forward to doing in the Lambeth schools?

Other questions asked were:-

What inspired you to become an MP?

What does being an MP involve?

How were you elected?

What do politicians do?

How are decisions made about keeping Lambeth safe and clean?

What changes would you like to bring in Lambeth by 2017?

What will the future be like for young people in Lambeth?

Why do you think that education is important?

What can you do about our local amenities eg. our library?